Menu
Get the Android App 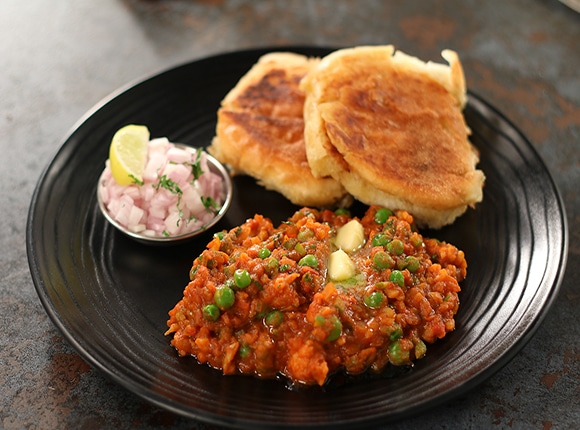 Pav bhaji – what exactly is it?

Pav Bhaji is served with a soft burger bun (pav). During their brief stay in Mumbai (then known as Bombay) in the mid-15th century, the Portuguese brought Pav or Pao (bread) from Portugal. During the 1850s, this dish was created by Bombay textile mill workers, as a light lunch was advised. We used ingredients from various diets to make the pav bhaji recipe. Vegetables like potatoes, onion, pea, carrot, and onion are used to make bhaji. Also, the pav bhaji masala is a spicy mix similar to Chaat masala but hotter.

While serving, accompany the bhaji with pav (buttered buns). The pav bhaji masala recipe became popular across India after its debut in Mumbai. Furthermore, it is found in most Indian restaurants overseas too! Now you can make restaurant style pav bhaji or even pav bhaji homemade style by following this Pav bhaji recipe.

Pav bhaji recipe: how to cook it at home?

The secrets of cooking best pav bhaji masala or Pav Bhaji like a pro:

This spicy and tangy pav bhaji is the ultimate in street food! Anyone who hasn’t had the opportunity to enjoy it is missing out! Now make this easy pav bhaji recipe in no time.

Yes, swap out the butter for vegan butter, and you’re good to go.

This delicious spice blend combines many whole spices, such as coriander seeds and cumin seeds, with ground spices, such as amchur (dried mango powder), turmeric, and black pepper! Several Indian grocery stores sell pav bhaji masala, and making it at home is just as simple.

Pav Bhaji isn’t exactly a healthy dish. It’s best to eat this delicious meal in moderation, as it contains potatoes, butter, and bread.

People prefer well-known brands for pav bhaji masala. Only a few locally made ones are tasty too.

Signup for our newsletter